Social media consumption worldwide has increased considerably during the confinement period caused by the COVID-19 pandemic, with YouTube and its 2 billion active users dominating this space. As a result, many brands have modified their digital strategy in line with the current situation and are committed to staying close to their audiences by publishing content. This can be seen in the latest report from Divimove, which analysed the most popular industries and brands in terms of subscriber numbers on YouTube and their performances on TikTok, Instagram and Facebook. The study examined the top 500 brands in the Brand Finance Global 500 2020 report and extracted the ranking of the five sectors with the most subscribers. Top of the list are the Media, Technology, Automotive, Food & Beverage and Apparel & Accessories industries. In terms of the top five brands for each industry, the following stand out: Netflix (17.6M), Apple (13.4M subscribers), RedBull (9.69M), Ford Motor Co. (2.1M) and Victoria's Secret (1.89M). The number of subscribers has been prioritised because it reliably reflects the organic growth of a YouTube channel, more so than the number of views, which may vary depending on the paid ads.

In addition to adding over 26 million new subscribers to its streaming service in the first half of 2020, Netflix also enjoys a strong position on social media. In the group of networks analysed, Netflix has over 124 million users, including both followers and subscribers, with Facebook being the most popular. It is followed by ABC News (10.6M), Warner Bros. Pictures (8.8M), ESPN (7.45M) and Fox News (6.61M). 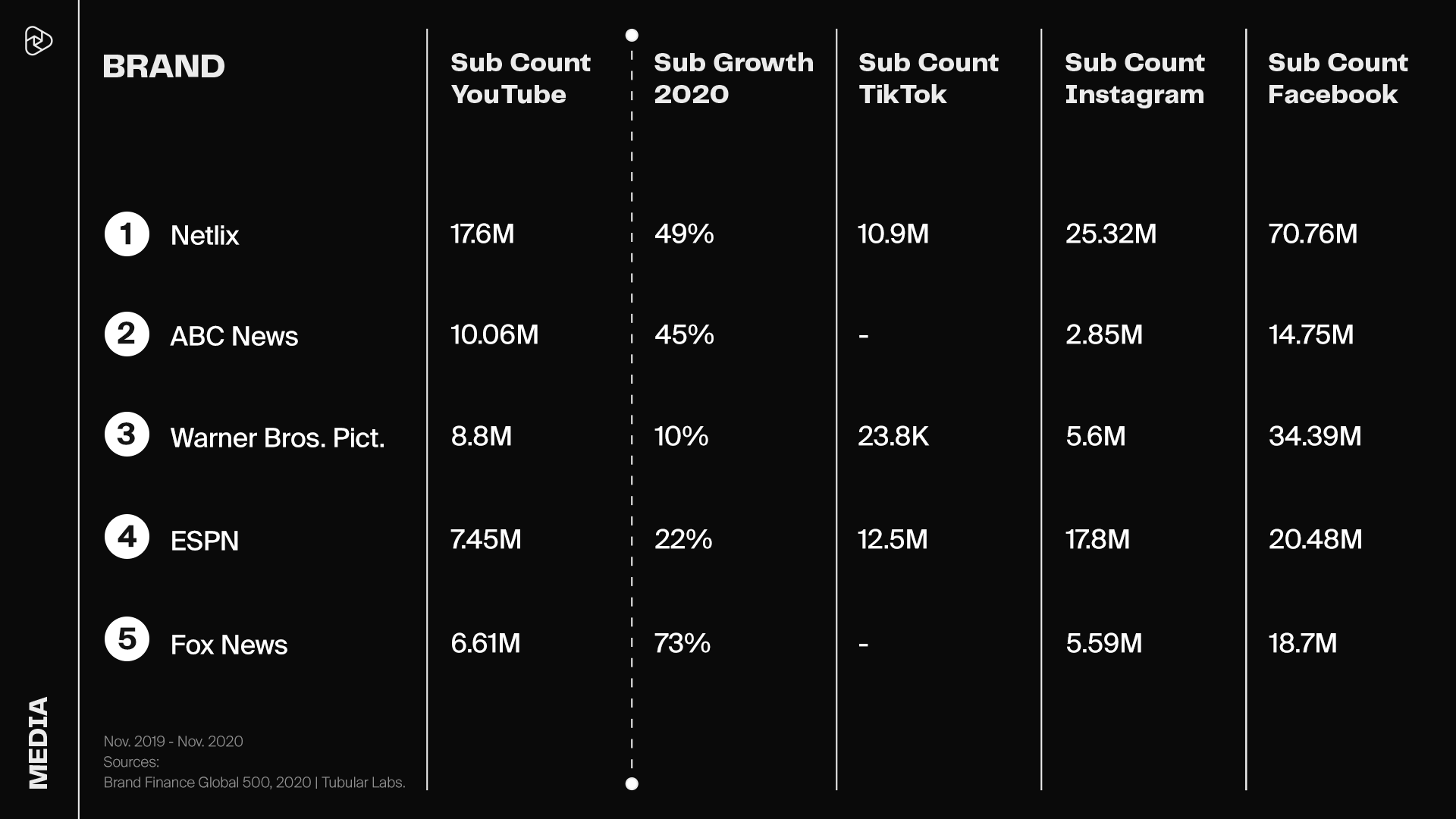 PlayStation, Apple and Xbox, the only ones with a profile on TikTok

The technology industry ranking is led by Apple (13.4M), just ahead of PlayStation (12.6M) in second place. The latter, however, has the largest number of followers on other social media and is one of the only ones, together with Xbox and Apple, with a profile on TikTok in this category. The ranking is rounded off by Google (9.52M), Nintendo (7.29M) and Xbox (4.22M). For the fifth year in a row since the study was first published, Red Bull leads the sector with almost 10M subscribers on YouTube. In second place is Coca-Cola, which also has an enviable number of followers on Facebook and Instagram (108.39M). Third place is held by Pepsi (850K), followed by Sprite (637K) and Heineken (522K) in fourth and fifth place respectively. 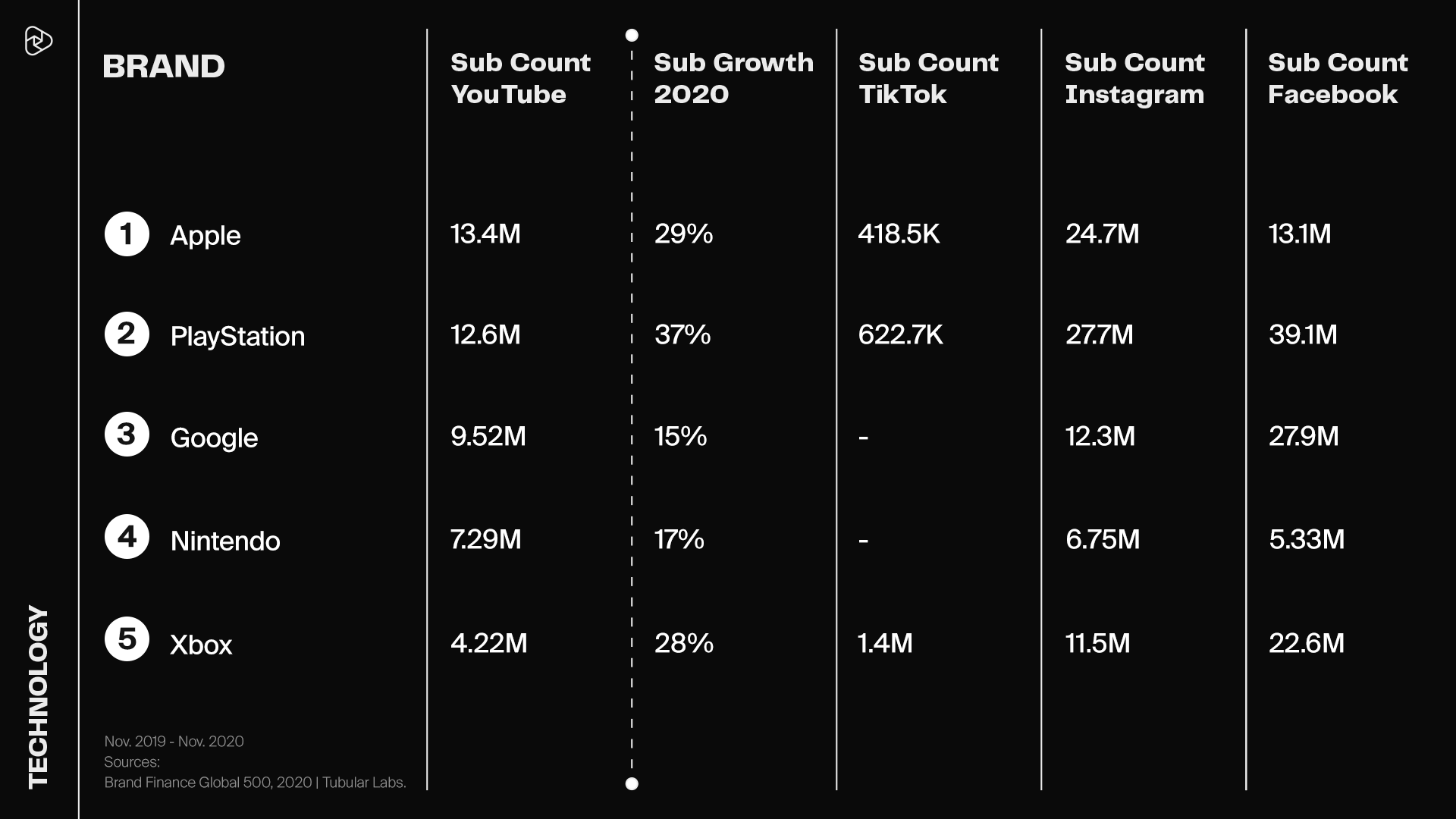 Mercedes-Benz, the most followed on social media

On YouTube, American companies Ford Motor (2.1M) and Tesla (1.56M) lead the automotive sector. Although Mercedes-Benz is in third place on YouTube (1.48M), it is the best performer on Facebook, TikTok and Instagram, with over 51.9M followers overall. BMW (1.12M) and Porsche (939K) are in fourth and fifth place each. With 3% growth on YouTube from the previous year, Victoria's Secret continues to lead the Apparel and Accessories industry with 1.89M subscribers on that platform. It is closely followed by Chanel (1.67M) and Nike (1.54M). The latter stands out for its high number of followers on Instagram (122.7M) and TikTok (1.3M). Finally, Adidas (914K) and Dior (848K) round out the top five ranking in this category. 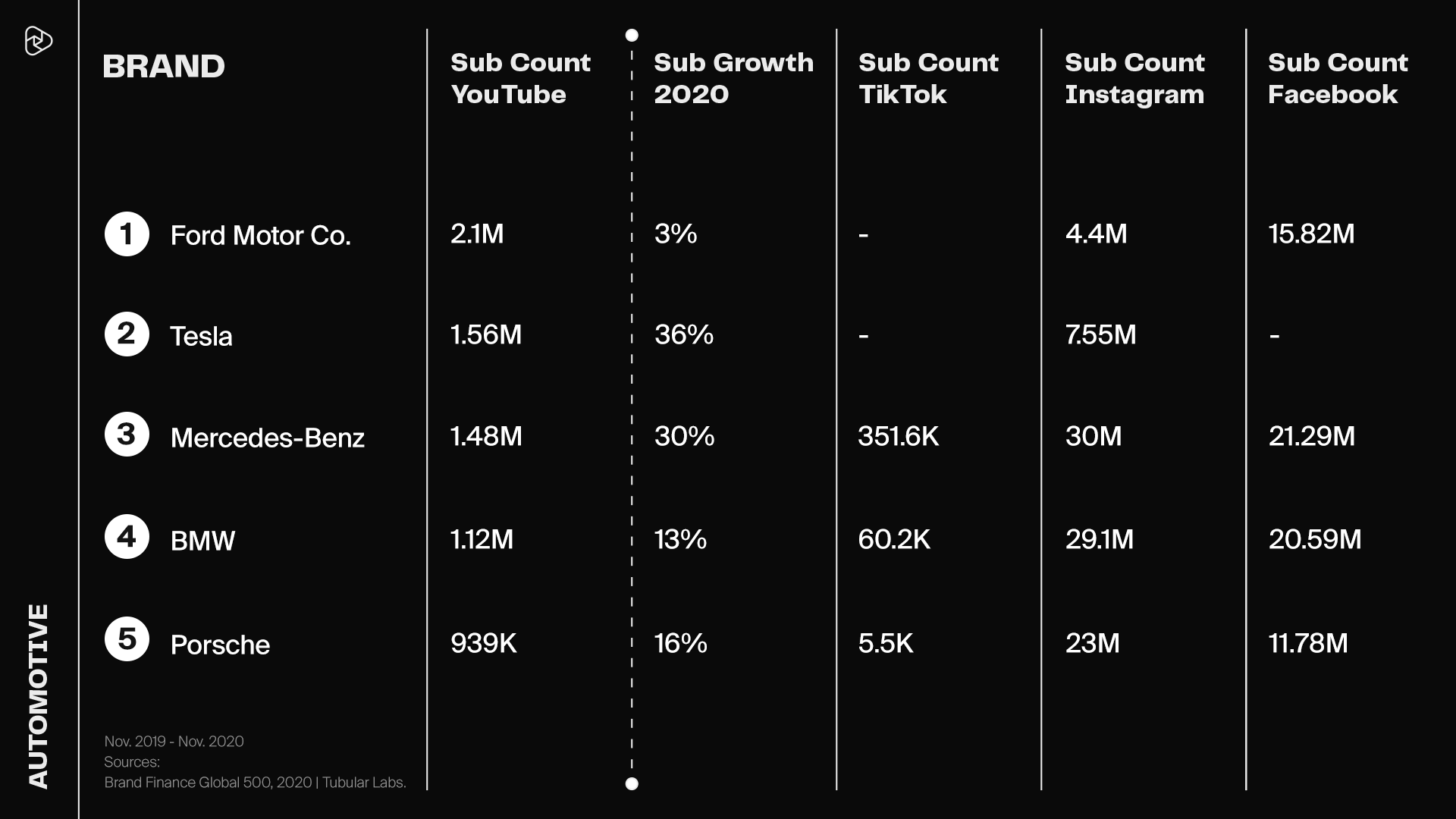